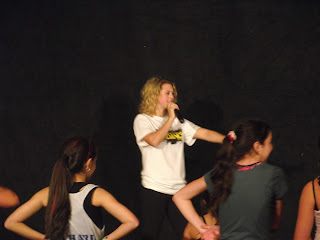 The week started last Sunday when we took J out to Long Island for a dance workshop with none other than the Season 7 winner of So You Think You Can Dance...LAUREN FRODERMAN!   The workshop was from 12pm-5pm.  Lauren taught 2 classes - jazz and contemporary.   Another class was taught by a special guest choreographer... KC Castellano from Born to Dance!  They were both really nice and gave a lot of great tips and information.  Lauren did a Q&A and autograph session at the end.

K will not be taking the assistant manager job at the health food place.  It turns out 2 of the stores are closing, including the one she's in now and the one she was going to.  She's not too broken up about it - she got a heads up about the stores closing a couple of weeks ago so she went right back to the place she applied for  over a year ago - the laundromat.   They had no openings, but all of a sudden the manager called K the next day to say they decided to make some changes and she's hired!  So she starts next week and is really looking forward to it.  This is where she wants to be.  Yay!


I went to J's parent-teacher meeting today.  She's doing wonderfully in school and her teachers love her.  Her Social Studies teacher said she writes really well and always does great on her essays.  I will sing the praises of homeschooling on that one.  Never a formal writing lesson, yet she's always praised for her writing.

W's academics this week included reading more of The Princess & the Goblin. Michelangelo, and American Tall Tales (Pecos Bill).  We still doing a review of long division with a lot of practice problems (which we may continue into next week), and spelling exercises ( words ending in -ed and -ing and the rules that go along with it). I never realized how hard the English language is.  So many rules and inconsistencies.  There was also the big Halloween party and bake sale at Scouts. 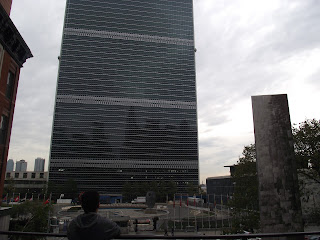 On Wednesday, we went with the homeschool group to the United Nations.  What a great trip!  I hadn't been there since elementary school, so it was new for me, too.  All the kids were 10 and 11 years old and the parents got to come along.  We had a tour around most of the building.  The guide spoke in a microphone clipped to his jacket and all of us wore a headset to hear him.  That was cool - it kept the kids focused and we didn't have to strain to hear what was being said.  The kids were very interested in everything - they asked and answered so many questions.  It was a beautiful day to be in Manhattan.  The following pictures are from inside the U.N.: 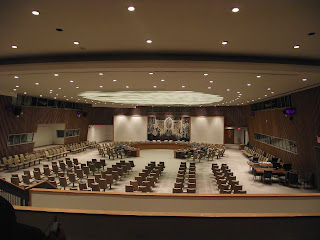 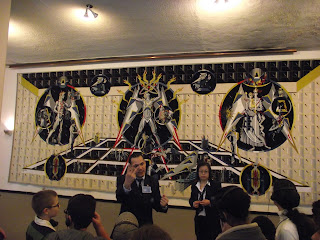 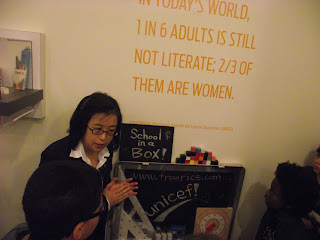 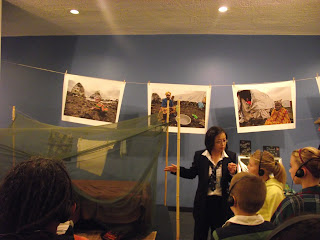 W had an amazing time camping with the scouts this weekend.  The weather was perfect.  Friday night was a bonfire and Saturday was a full day of activities.  These weekends are for the whole family.  I'd probably go along, but my girls have too many weekend things going on, and besides W gets to do some male bonding with his dad.  Unless, of course, his friend's cute sister wants to follow him around and admire his shooting skills.

We are zipping through the Flash Kids Math 5 workbook this week.  My new favorite thing in the world is Khan Academy!.  I love it and cannot say enough good things about it.  W watches a 10-minute video, we discuss it a little, and he does math problems in his workbook - there are math problems he can do on that website, too.  I may even show the site to J for her high school math.

This week's reading so far have included :  A Child's History of the World, Marco Polo, The Princess & the Goblin, and Science Lab in a Supermarket.  And he continues with Spelling Skills every day.  That book has done wonders for his reading ability.  He does several pages of activities for 40 new words and 2 pages of grammar each week.  The best part is that he loves it!  I also pulled out the HOP Master Level.  There are 4 levels of difficulty - blue, green, orange, then red.  Each one is supposed to be more difficult than the last.  We first got the program in November of 2009 and at that time he was struggling through the blue level, which is the easiest.  We put it away for a while and then last week I pulled it out again to see what he could do.  I grabbed the last story card from the 4th and hardest level (red) and he read the card with no problem.  WOW!  I mean I knew his reading improved since I recognized his dozens of dyslexia symptoms and we jumped into a multi-sensory reading approach, but the strides made in only 2 years are really incredible.  I love homeschooling.
1 comment:

Yesterday we had a great homeschool group trip to the Paley Center for Media - which used to be called the Museum of Television & Radio.  The class was all about sound effects used in the old radio programs.  The kids listened to several programs and discussed how you can tell so much about what's going on with only the background sounds.  Then they got to go onto the stage and try out a bunch of different items and devices that make the sound effects:  A wind machine (essentially a vacuum box sucking air in through 2 small cylinders and had a speed control dial), coconut halves (horses trotting), a screech box (cranking the handle moved nails over glass and made a horrific screeching noise that could be anything from subway brakes to a park swing), a cowbell, small, heavy mats (for any "thud" sound), tied-together corn stalks (when shaken it could be rain, wind, or fire), and a large sheet of metal for thunder.  Most of these things were donated from the 3 major networks.  The instructor had the kids use the items to make the sound effects for a story she read out loud about a stampeding heard of cattle on a dark, windy night.  At the end of the class we watched a behind-the scenes 1940s clip of a radio show being performed.  It was interesting to see a whole crew just for the sound effect devices and just a handful of actors being dozens of characters.

After the class we decided to check out the library on the 4th floor.  It's a huge room with several TVs on each table and your own set of headphones.  Here you can pull up almost any TV show going back to the 1950s - and watch it with the original commercials!  A member gets 3 hours at a time.  W watched some old episodes of Pee Wee's Playhouse and All That.  I watched the Magic Garden, The Judy Garland Show, and Father Knows Best.  My friend was so excited to see the very first episode of General Hospital, lol.  W and I signed up for a free 1 year membership and will definitely be back.  Great trip!

This week's academics was our last week doing multiplication and division drills.  It's all about it being second nature.  Now we can get back to the 5th grade review book.  I may even do the Flash Kids 6th grade review book before hitting TT7.  I'll see how it goes.  The readings this week included more of The Heroes, The Princess & the Goblin, Science Lab in a Supermarket, A Child's History of the World, and Michelangelo.  Spelling Skills, a page a day, is also still going on.  So, nothing really new and interesting with the academics.  We're just plugging along at a nice pace.  Soon we'll be outdoors a lot more - a new skate park opened up about 10 minutes away in one of my favorite parks!  It's the opportunity I was looking for to get those nature studies in.

W is going camping this weekend with the scouts.  He's so excited and looks forward to this autumn one every year.
No comments:

This week we stayed focused on basic multiplication and division.  We used flash cards to speed through all the facts again.  Then we switched it up - instead of giving me the product of the 2 numbers, I told W to turn it into a division problem.  We spent about 15-20 minutes on that each day.  We also started reading The Princess and the Goblin.  W wanted nothing to do with books about princesses, but this starts out creepy enough to hold his attention.  We also read more Michelangelo, Marco Polo, and Science Lab in a Supermarket.  W gave really good narrations.  He didn't do written narrations this week, but he will next week.  He did a page of the Spelling Skills workbook every day, too.  I wanted to get to some art, but he had no interest.  It's ok though, he spends enough time on his own being extremely creative.  Just now, as B was heading to Home Depot, I heard W say, "Dad, pick me up a foot of 1/2" PVC and a coupler".  It sounds like more Nerf gun modding will be happening today.

We met some friends at the Metropolitan Museum of Art the other day.  We started out in Ancient Rome, then to Egypt, and finally 13th Century England to see the armor and weapons used during that time.  The boys liked it, but were eager to get to Central Park for some running around and Nerf wars.   So, we went outside, got a few yummy mustardy knishes from the street cart, watched a wonderful Doo-Wop group for a few minutes, and then walked the few blocks to the park.  Click on the pictures to make them bigger.


K has been made assistant manager at the health food place where she works.  She'll be at a different location and she's looking forward to it.  She'll be getting a really nice raise, too.  Her main goal has once again become saving for a car.  She had a nice week.  Her friend was down for the weekend from college.  They both visited their old high school - K grabbed a bunch of her uniform shirts and sweats to donate.  Tomorrow we're all going out to my mom's til Monday since the girls are off from school.  I can't wait to see my beautiful niece again - she's almost 3 months old!

I'm Angela living in NYC with dh (B) and 3 (adult) kids. All were homeschooled at various times. Oldest dd (K, 26) is a hair colorist/stylist who went to a journalism high school and is an Aveda graduate. Youngest dd (J, 23) is a dance instructor who went to LaGuardia High School for the Performing Arts and then to a musical theater conservatory. As of 2019 she is back in college pursing another degree. Ds (W, 18) homeschooled from Kindergarten to 12th grade and started college in the fall of 2019. We were unschoolers for the majority of our homeschooling and we always made sure to take advantage of the abundant resources, experiences, and opportunities this amazing city had to offer. Browse around a while and see what it was like living and learning in the greatest city in the world!