I took W to a cool class at the Whitney Museum of American Art on the Upper East Side.  We discussed a painting by John Sloan called Backyards, Greenwich Village from 1914 and two paintings by Edward Hopper.  One was called Barber Shop and the other was called Early Sunday Morning.  With this last one, the kids were told to imagine what they thought might be inside the shops along the street.  They were given art stix and paper to draw with.  We never went to the Whitney before.  It was really nice to be with our friends there. 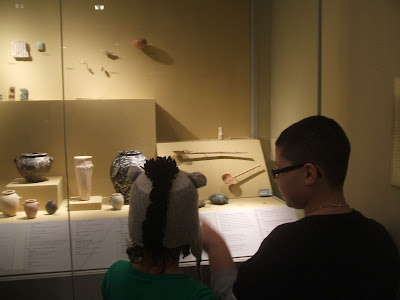 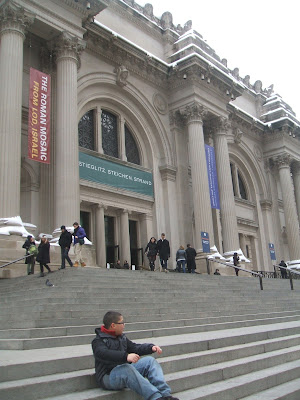 After that, W, a few friends, and I walked over to the Metropolitan Museum of Art.  It's been 4 or 5 years since we'd been there, so I figured it was time.  Outside, we all got some hot dogs from the street cart and took a few pictures.  It's such a gorgeous building.  My corporate membership got my friend and me in for no charge and all kids under age 11 are free - so that was cool.  We started in the Egyptian gallery (my favorite) and ended up in Ancient Rome.  Of course we hit the gift shop before we left.
2 comments: 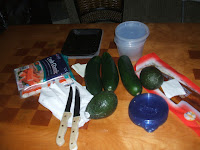 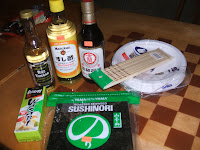 Yesterday W had a great time making sushi in the West Village.  It's always fun getting together with our homeschool group and thanks to some really creative moms, we usually get to do these interesting activities.  We had all the tools and ingredients - bamboo mats, avocado, cucumber, rice vinegar, soy sauce, fake crab, nori sheets, teriyaki eel, and a rice cooker.  We were shown how to layer on the ingredients and then how to roll it using the mat.  The kids did such a great job with it.  I tried one too, but my roll sort of fell apart, lol.

When we got home, we decided to do a few of those extra subjects we often neglect.  So we listened to each of Vivaldi's "Four Seasons" while looking at the beautiful paintings of Caravaggio.  We did this for over 30 minutes with great discussion about the time periods in which they lived, what the style of dress was, Italy, how religion seemed such a big part of life, etc.  Then we researched a few things about trees for about 20 minutes.  It was late in the day, so we didn't get to Spanish or Dictation, but we'll figure that out by next week.  It was fun and reminded me to make a stronger effort to fit these subjects in every week.
No comments:

I haven't posted our homeschooling schedule since the beginning of December.  This is the one W thought of and we've been using it.  I still love it and so much gets done.  Here's how it's laid out:


And W's new "Read-to-Me" is A Cricket in Times Square.  Yes, that's right.  He picked it and he is actually reading 2 pages each day out loud to me from that 6th grade-level book.  I cannot tell you how proud of him I am.  Backtracking to an easy reading book then up again to something harder tends to work with him.


W has planned and made his meals for his scout project.  I did one with him.  He knows a lot about cooking.  Besides that, he has been modding Nerf guns, making new crossbows, and even made himself a trifold wallet out of duct tape.  All the while he continues to make tutorial videos about cartoon drawing, Super Mario Bros. on the Wii, and different ways to change-up Nerf guns - I should suggest making a cooking one!.


J had finals this week at school.  Then today her English quiz was to perform a monologue from "Fences".   And tonight is her school dance.  Thankfully, she enjoys keeping busy.  Tomorrow is her 9am pointe class, then she teaches her new baby class, then there's 3-4 hours of solo, duet, and group numbers rehearsal with her dance team.  After that, she grabs a quick lunch with her friends and heads to another friend's house to spend the day.  I'm exhausted for her, lol.
No comments:

At scouts last week, W has another cool project to do.  He is working toward getting his Family Badge (or something like that).  He has to plan out 3 meals, make a shopping list for those, and prepare everything himself.  He knows how to do this already, having done it a few times, but now it includes writing things down and thinking of whole meals instead of just one dish.  He's excited to get started.  Since B is the chef in the house, they will be doing everything together (there's never enough dad and son bonding).  I hope I remember to take pictures. 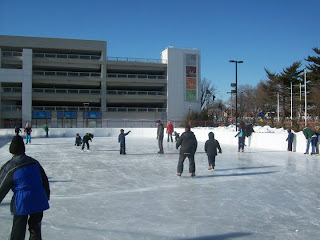 The scouts also went ice skating yesterday.  They went to a brand new place that was just created this winter.  It seems like they just sealed off an area, filled it with some water, put some plastic railings all around, and called it a rink.  Simple, yet so nice.  There's a mall across the street and a huge cemetery across the other street.  They had the whole place to themselves and had a great time.


I re-organized my entire apartment (again, lol) and I'm so please with how it looks now.  We threw out so much stuff - it looks so much bigger in here!  An open, clutter-free home does wonders for my motivation.  I have so many plans brewing!
No comments:

J did an essay for English the other day.  When she handed it in, the teacher read the first paragraph and told J it was VERY good.  Most of the kids didn't understand the assignment (and didn't do it), so the teacher told them to look at J's "because she did an excellent job".   Ok, now, what I'm finding incredible is that J has never really had any sort of real writing instruction.  She writes from her heart and how she'd tell someone a story out loud.  The teacher is probably used to the cookie-cutter way of writing all kids learn in elementary/middle school and I would think it's refreshing to see more of someone's personality in their work.  Another hat-tip to homeschooling.  Best decision we ever made.
2 comments:

We haven't finished AO Yr 2.  Oh well.  We'll get to it.  We tend to do more readings than each AO week requires, so we'll eventually catch up.  I'm not worried about it.  W is on track with math, spelling, & reading.  That's right...reading.  He has been reading to me a lot and his fluency, intonations, and comprehension are spot on.  The book we're using as his "read-to-me" is an old one I've had lying around since K was little, called, Treasury of Virtues.  It's below his reading level, which I did on purpose, to boost his confidence.  And it worked.  It creates a fierce belief in himself that he really can do it.  I can see that he tries so hard - and it has really paid off.  So proud of him.  Here's some more of what we did this week:

His narrations are great.  He's been doing them for 2 years now and has it down pretty good.  Starting next week, he'll be writing one of them down in paragraph form.  I wanted to wait until we started Year 3, but who knows when that will be.  He's ready for writing and I'm excited to see how he does.
1 comment:

We had a wonderful Christmas.  We went out to my mom's again on Christmas Eve.  We had our 7-fishes traditional Christmas Eve dinner, which included:  shrimp parmigiana, fried calamari, stuffed flounder, and pasta with a zuppa de pesce sauce.  Everyone was in bed before 11pm.  They figured that the earlier they get to sleep, the faster they'll wake up, LOL.   Mom and I arranged all the gifts, stuffed the stockings, and watched Meet Me in St. Louis with some tea and cheesecake.

Christmas morning was fun, as usual.  The kids opened their big gifts first.  Then onto everything else.  It was great.  Opening gifts lasted a lot longer and was so much less chaotic (but still really fun, I swear) when I did things my way, lol.  Breakfast was eggs and bacon, flavored coffee, rye toast, tea, etc.  My sisters came over and we exchanged more gifts and did more eating.

Dinner was at around 5pm.  We had stuffed shells, chicken francese, loin of pork, etc.  Always too much food.  We brought home a bunch of it, though.  At 6pm we packed up and headed back into Queens to see dh's family at MIL's house.  More gifts, more food and we were home by 10pm.

I had most of the week off from work - mainly due to the ridiculous snowstorm we had here.  Normally it wouldn't have been a problem, but our spiteful sanitation workers decided to take out their frustrations on everyone in the city who was not involved in their budget cuts and hiring freezes.  So instead of taking less than a day to get the city up and running again after 20" of snow, it took 4-5 days.  Conveniently, they do this right after they all got their Christmas envelopes.  grrrr.

But overall, and through most of us battling stomach viruses, colds, and coughs, we had a wonderful holiday season.  We topped it off by celebrating New Years Eve with some homemade sangria, trays of snacks,  playing Taboo, and trying to stay awake til midnight.

2011 is going to be a year of new beginnings.  I think I say that every year, but I'm going to really make it happen this time.  Anything I don't like, I'm changing.

I'm Angela living in NYC with dh (B) and 3 (adult) kids. All were homeschooled at various times. Oldest dd (K, 26) is a hair colorist/stylist who went to a journalism high school and is an Aveda graduate. Youngest dd (J, 23) is a dance instructor who went to LaGuardia High School for the Performing Arts and then to a musical theater conservatory. As of 2019 she is back in college pursing another degree. Ds (W, 18) homeschooled from Kindergarten to 12th grade and started college in the fall of 2019. We were unschoolers for the majority of our homeschooling and we always made sure to take advantage of the abundant resources, experiences, and opportunities this amazing city had to offer. Browse around a while and see what it was like living and learning in the greatest city in the world!