I have decided to streamline my posts.  Now that the kids are older and only W is homeschooled  I'd like to try posting just once a month.  So here we are at the end of May 2013.

I already mentioned that W took a wonderful nanotechnology class at the beginning of May.  He also took 3 classes with our homeschool group at the Tanglewood Nature Preserve in Long Island.  The first class was "Forensics".  The kids learned about fingerprints, footprints, DNA, dental imprints, and piecing together a crime scene.


The second class was called, "Math in the Natural World".  Fibonacci numbers, bilateral and radial symmetry, and the reasons for the various shapes & patterns found in nature were actively discussed.  The instructor took them out on the nature trail to see these things up close.  Examples of these cool math patterns were found in beehives, skunk cabbage, ferns, trees, and insects.

Another month of science classes was completed at the Science Museum of Long Island.   So far he's had classes on:  microscopes, lights/lenses/lasers, types of  rocks/minerals, constellations, and more.   They always do part of the class outdoors with a nice walk around the woods.  W's class has about 8 kids who are all 11 to 15 years old.  One class he especially enjoyed was dissecting owl pellets.  He had done this a few years ago, but he's older now with a different perspective and understanding.


A new activity W thought would be fun is parkour.   He's taking weekly classes now.   He is learning how to jump, flip, roll, and tumble on, through, and over various objects.  There are a lot of gymnastics and coordination moves involved.  He loves it.  The instructors are masters at parkour and so amazing to watch.

About a week ago, B took W to a NY Mets game.  They go together once or twice a season.  Citifield is so close to our home.  I dropped them off at the 7 train and picked them up a few hours later.  W has so much fun at these games because there's always something there for the kids to do and he comes home with some cool free stuff.


Theater class is going very well.  I think it's the best money we've ever spent.  His reading confidence is through the roof.  Everyone in his teen groups is so friendly and supportive.  W was so worried about his reading - all the mono-/dialogues, memorization, and cold readings, but now, he looks forward to getting picked to read something.  He even requests to read.  I love this class.  I can't wait to see their big performance next month.

CCD classes are over - his last class of this season was May 19.  He has one more year (7th grade) and then W makes his sacrament of Confirmation in the fall (or winter, maybe) of 8th grade.  He's been going to this class with the same kids since he was 2.  The new season starts at the end of September. 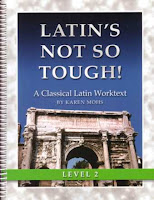 We are making good progress with the academics.  We will be on a semi-full schedule over the summer, so I figure we'll be done with math, spelling, and vocabulary sometime in autumn.  That's when I'm thinking about trying AoPS PreAlgebra... but we do love Saxon.  I'm still up in the air about choosing Saxon 8/7 or AoPS.   Well, we still have a few months to decide.  We have already started our 7th grade science and history programs, so we'll just continue with those.  W has also recently expressed an interest in Latin, rather than Spanish, so we are going to try it out.  I did some research and looked at tons of reviews and samples and finally settled on a program called, "Latin's Not So Tough".  It wasn't until after choosing that program that I noticed that they call themselves "the Saxon Math of Latin curriculums".  That might be why I was drawn to it.  I plan on starting with Level 2, which starts off with a review of level 1 (the alphabet and pronunciations).   Not sure if he'll enjoy it, but it will certainly help him with reading and vocabulary.

J said the shoot for the music video was great.  I dropped her off at 9:30am and they finally finished at around 11pm.  They did her hair and makeup - her hair was kept long and straight and her makeup was dark and almost goth-like.  She had a blast.  They even provided the kids with lunch and dinner.  Even though J hasn't had a lot of training in hip-hop, she has really come into it on her own.  I love watching her dance.  I can't wait to see this video.

She was also in another competition this month.  She is so enjoying the freedom of being an independent.  Nothing is holding her back.  She choreographed another solo (jazz) and just finished 2 days before the competition.  She's using a new studio and renting space as she needs it.  It's fantastic and it's a beautiful space.  She got a Platinum award for BOTH her solos and a "unique style" award for her new one.  One judge told her he could watch her dance all day and another said she loved the simplicity of her costume (a pretty little soft pink dress she just picked up the day before at Forever 21 for $13).  It was wonderful that J got all the recorded judges comment on a thumb drive.  Several of her friends came to cheer and support her - and there were a lot of kids there she knew from school or other studios.  There was no stress, no worries, and I can happily say that competitions have become fun and exciting again - just like they used to be years ago.

K finished up her internship in Manhattan this month and started a new job.  It's still part-time, but she's making more in 1 week here than she did in over a month at her other part-time job.  Now that her money situation is where she wants it (for now), she can focus more on getting her career off the ground.  She has an entrepreneurial mind and once she's determined, she can do anything.  But for now, she's putting away 3/4 of her money for a new (used) car.

The Start of May 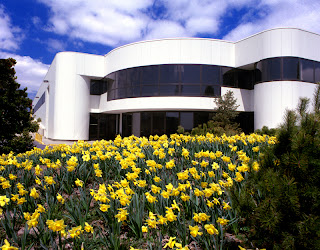 W went to a wonderful class at the Brookhaven National Laboratory in Long Island last week.  It was a 2-hour class for ages 11+ on Nanotechnology.  The idea is that materials at the nanoscale, measured in billionths of a meter, behave differently than at the macroscale.  Through several experiments, the kids could tell that nanotechnology is important in future products and technology.  One experiment involved exploding a film canister with alka-seltzer.  They also made a diamond molecule out of connectors and used a solar-panel and an LED to make light.  W really liked that class.  The instructor was great  - she kept his interest for the whole 2 hours. 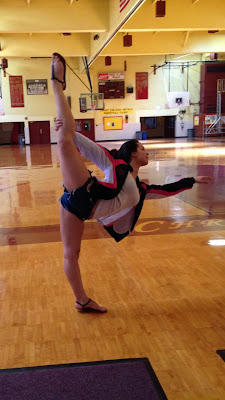 J is looking so forward to summer.  The music video she is in is shooting next weekend (finally!) and she just got a 285 out of 300 at a dance competition last weekend.  She is competing again in a few weeks as an independent and will be choreographing yet another solo for it.  Over the next few weeks she will be figuring out studio practice time (she has several options for various studio to use) and costume.  Her Junior Project for school is also coming along nicely.  She finished the choreography and just needs to practice practice practice.  We get to view all of the junior class's routines in June.  I can't wait.

W and I are speeding through Saxon 76.  We love the book, but I can see how some families hate it.  There are a LOT of practice problems.  Each chapter has you do a 60-100 problem basic arithmetic drill, then about 10 problems they call "mental math", then you go over the 2-3-page new lesson, then do about 10 problems solidifying that new lesson, then 30 problems that are a mix of the last 10-15 lessons (the spiral).  Whew.  W and I are getting a bit worn out with all of that, so now we only do the new lesson, the 10 practice problems, and maybe 10-15 from the spiral.  It's because of that spiral that W has gotten so good at math and remembers everything, so I don't want to cut out too much of it.  I'll just pick and choose the examples he should do.  We'll move through the book much quicker this way and he'll still retain his love of math.  Any kind of busywork/tedium will kill a love of learning so quickly.  It has to be strategically planned to have the intended effect, but keep the kids engaged at the same time.  Thankfully, we are able to do that!

At theater class last week, W did a lot of cold readings.  He called me when the class was over and was so proud of himself.  He did it and wasn't even that nervous.  He said he hardly stumbled at all.  The other kids and the teachers complimented him on his delivery, too.  This is just what he needs to build his confidence and believe he is great reader.  He has come so far in only a few years - from even last summer!  He's like a different kid.  I am so grateful to be able to homeschool.
2 comments: