So we've been tied to the house this whole week because workers are here ripping out and replacing all the wiring and fixing up a bunch of stuff. When it's done we will have some new ceilings and walls, new ceiling fans in the dining room and bedrooms, new kitchen lighting, a totally redone stairwell with new walls/carpeting/floor, refinished wood floors, a new circuit breaker upstairs, every room painted, and a bunch of new, safer electrical outlets. I'm so excited. I just can't leave while they're here (they tend to just walk out the front door without locking up). But it seems the kids have been getting more academic work done than usual. I've noticed with W that he really gets the history and science readings. He just loves the battle stories of the Romans, British, Spartans, Persians, etc. Paddle to the Sea is another one he looks forward to. It's a fun geography story that follows the journey of a wooden toy down rivers and lakes from Canada through the US and into the sea. He's mastered cursive writing and was even complimented on it at CCD class last week by his teacher.

I finally got the pictures from the Drawing Center and the Central Park Urban Rangers up on the last post. Click on them to make them larger!
2 comments: 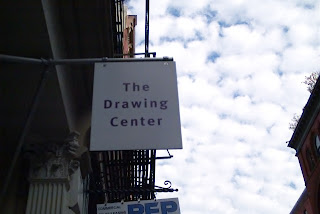 We had 2 wonderful field trips this week with the homeschool groups. The first one was at a place called The Drawing Center in Soho. It is a very quaint, odd little art gallery. We were in a room full of pencil drawings made by one of the very first women industrial designers. 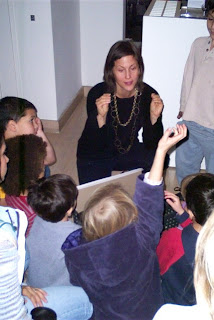 Her name was Greta Magnusson Grossman and she was an influential figure in the Southern California design movement of the 1950s and 60s. After the tour and discussions, the kids got their own boards, white paper and tracing paper to create their own "work spaces" (along with rulers, markers, and pencils). The main pieces were drawn on the white paper and then the accessory pieces on the tracing paper (which you can flip up and down). 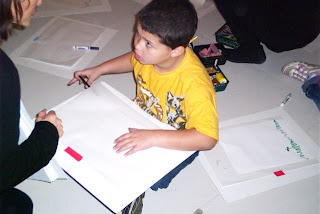 Then the kids discussed their projects. They enjoyed it. We brought J's friend A along with us, which worked out perfectly as this class was for 4-8y/os and they got to hang with each other. Some of us mom's walked over to The Scholastic Store after the class. Wow. I love stores like this. They have play areas for the kids, all kinds of books, toys, and games, and the staff was friendly, patient, and helpful. 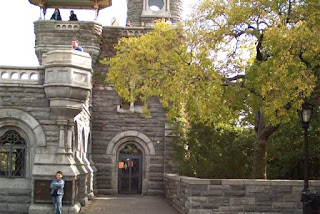 On Friday, W had his monthly Urban Rangers Ecology class again. We got there early and explored Belvedere Castle a bit, taking pictures from the top. The park and the city around it is just gorgeous. The day was beautiful, too. The kids started out discussing more of the local flora and fauna. 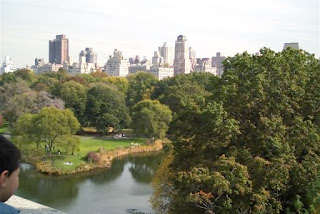 The focus was mainly on the various trees in the park. We all did a scavenger hunt - we were provided with a big card of different leaves and different teams had to find all of them. We found gingko, sugar maple, black oak, tulip tree, london plane, sweet gum, etc. 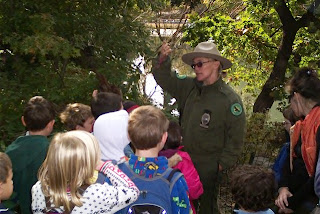 I don't know who had more fun, the moms or the kids! We walked a bunch of trails and ended up in a field of different trees where the kids played another game. 2 kids were the "hawks" and had to catch the others who were "birds". The park ranger called out names of trees and the birds had to remember which tree 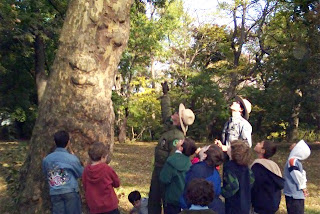 was which and run to it, as that one then bacame "base". W was very proud of himself as he was declared the "winner" at the end.

After the class, a few of us hung around and our boys (ages 3-8) ran around in an area called "The Glade". After an hour or so, we hopped back onto the train to get back home in time for W to make it to cub scouts. We couldn't have asked for a better day.
No comments:

Today W did a lot of cursive writing practice, 3 pages of math, 3 pages of phonics, we read a tale from James Herriot, a "Just So Story", and played word games on a few internet sites I found. Math was story problems and graphing. Phonics was review of long vowels and silent e. The internet sites had spelling quizzes and creating words from blended beginnings and endings. He is determined to increase his reading ability and speed. In CCD he refused to read for the teacher at all because he's self conscious. Today, after our scheduled stuff, he insisted on going to those learning websites. Then he asked if we could go to the big bookstore so he could get some books for him ("on his level"). I will never turn down a request like that! At the bookstore, he picked out about 7 books he wanted. They were the "I Can Read" - types he enjoys so much. Thankfully they were all around $4 each (more like $3.25 with my educator discount!). I also picked up (the real) Peter Pan to read to him and The Iliad/The Odyssey for J. Those stories are somewhere in the schedule and I got a beautiful wrapped hardcover copy of both for $20. Tomorrow we have a trip and I'll be bringing some books for W to read to me while the older kids have their class. He's set to be a "great reader" by next Sunday.

This afternoon, J went to her friend's house to sleep over (I'm picking both of them up in the morning for the trip) and W scootered over to the park with B. W ended up in an impromptu soccer game with another kid there. I lost my camera again. That always seems to happen the week I have some trips planned. Ugh.
No comments:

This new year is moving along very nicely. I love autumn. That's when my new year starts. It's so beautiful outside - the leaves are changing color, the air is cool, and the moon has been really pretty lately. The kids have been taking breaks from the AO currculum here and there. They plan on eventually doing 5-days per week with it, but not yet. They like doing 4-days of scheduled academics (copywork, math, readings, workbooks) and the 5th day being for all the extra stuff (like Spanish, artist study, science experiments, dictation, etc). It's weird for all of us having a curriculum to follow, but I think we're adjusting well.

W made a flag and discussed Pennies for Peace at cub scouts. K is getting lots of praise at guitar lessons. Her instructor was very impressed that she memorized the new song they worked on the previous week. J had 3 hours of dance yesterday for new choreography and 4 hours of various dance stuff tonight. Her voice instruction is this afternoon and I can't say enough great things about how she's being coached (I listen by the door each week, lol).
No comments:

This week went by fast. With K being home for 3 days, we took a break from the schedule. We all got our eyes checked, new glasses, and new contact lenses (the girls and me). I did lots of cleaning. We bought Halloween decorations. The kids painted masks and wall hangings. It was a chilly, rainy week, so there wasn't much outside time. But we did play some indoor games, tended to the pets, watched movies, and honed the kids' culinary skills. W still ended up doing lots of math and reading this week, and J spent time on research (whatever catches her attention at the moment) and updated some of her web pages.

J had about 14 hours of dance this week. Her new dance solo is coming along nicely and she finally chose a song for vocal. Having these several months to practice it with the vocal coach is going to be great for her. W loved his musical theater class this week. There are lots of boys in the class this year, so he's excited about it. He also had a great cub scout meeting the other day. They talked about different leaves, identifying them, naming the parts, and making a project. There was also lots of talk about the camping trip that's coming up. W doesn't stop talking about it. B is also looking forward to it and already has everything they need.

As for me, I'm happy to say I had nothing fear over the big changes made at work. I settled into my new phone queue and my boss was right - I have more than doubled my sales over the last 2 weeks. I can't believe it. And the new money is coming at the right time. I hope it stays like this!
No comments: