Summer is half-way over and it's been good.  The NYC heat waves I can do without, though.  I think in August I'm going to start decorating for fall.  It's my favorite time of year and maybe I can get it here faster by the power of thought (and orange fabric leaves and scarecrows). I've decided to throw myself into the holidays this year.  Last year I was a pill and avoided most things.  I don't know why.  I mean, I wouldn't even listen to Christmas music.  So, now I'm ready to decorate, blast music, and do some fabulously fun holiday things with my family.  Bring it on!

The other evening I went to an amazing raw food demonstration given by Dayna Martin and Christina Cretella.  One of my homeschool mom friends hosted the event at her home.  It was so fun!  I've always been interested in a raw food diet and this inspired me again.  We had chocolate desserts, pad thai, soup, smoothies, wine, nachos, pancakes, and salad with a wonderful creamy dressing - all raw.  I'm planning on making a lot of these for my family, especially the desserts.  I love that the chocolate torte we had was actually healthier than eating a salad.  And you can eat these all day long without worry.  That's my kind of eating!  I am going to start out with only a few things that I'm almost positive my family will like:  a chocolate dessert - raw cacao nibs inside dates & coated with coconut, the salad dressing, green juices, and fruit smoothies.  I have to get all of us eating better.  The kids are wonderfully receptive to this.  Dh, on the other hand, needs a LOT of time to adjust.  I just have to be determined and focused and not give up.  Slowly we may be able to evolve into 50% raw.  That's the goal for now.  We'll see.

W completed his part in the dyslexia study at the Albert Einstein College of Medicine.  We were there over 6 hours.  W put on headphones, rested his chin on a strap, and watched and listed to certain images and videos while his eyes were being tracked and his hearing tested.  In an adjacent room there were several large computers showing extreme close-ups of W's eye.  It was fascinating.  The next part of the study included putting what looks like a swim cap (with dozens of small plastic-rimmed holes) on his head.  They squeezed a bit of gel into each hole, and attached an electrode to each hole.  Each electrode had a long wire attached to it that plugged into a machine.  They studied his brain waves and recorded which part of the brain is used during each task.  I was watching all this from another room and through glass, so it's hard to get specific.  They sprung for lunch again, too.  I worried for W since he was performing tasks for over 2 hours at a time, but he came out in great spirits.  At the end he was tired, but the $78 cash they gave him perked him right back up again.  We still weren't told anything about the initial testing.  It may be another month, they said.  I'm totally fine with that since this really was a gift for us.

Academically this week, W continued with the Saxon math addition drills, we're up to chapter 6 in The Lion, the Witch, and the Wardrobe, and we started Wordly Wise 6.  This summer is just a light taste of what we'll be doing in the fall, when everything gets more rigorous.


This was finally the week that W got his dyslexia testing.  We drove up to the Bronx, met with the neurophysiologist, and started the 4+ hours of testing.  W sat in a small air-conditioned room with the tester while I watched through a 2-way mirror and filled out a ton of forms.  He did all kinds of tests:  spelling, listening, blocks, writing, word sounds, logic, patterns, etc.  He got a few 5-minute breaks and about 45 minutes for lunch (which they generously bought for us).  When he was done, he was given $54 cash, which he was thrilled with. 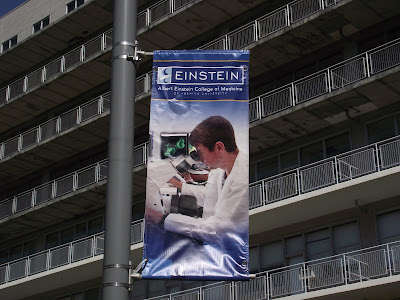 The neurologist told us she has to sit with the tester and go over all tests.  It could take a while.  The next step would be to take part in a brain wave scan as part of a dyslexia study.  We already met the EEG guy who went over what it is he does and what W would do if he's eligible for the study.  It's basically just  performing a bunch of tasks and computer activities to see which parts of the brain is used while wearing something that resembles a shower cap that they attach dozens of wires to.  The only kids eligible for the brain wave study are dyslexics.  The neurologist said she won't have a full diagnosis for a week or 2, but just by a quick once-over of W's responses, she thinks he's a candidate.  And the next day the EEG guy called me to schedule an appointment. 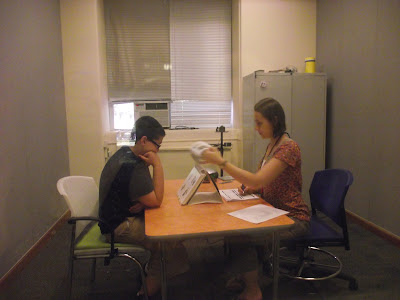 Sigh.  I knew since he was 8 that W did in fact have dyslexia.  There's a big emotional difference though, between a mom-diagnosis and an actual neurophysiologist diagnosis.  I guess I still just held onto the idea that W's reading/spelling/writing issues would just go away one day.  When I do get the full report, it is going to be very bittersweet.  I mean, I'll be so glad and relieved to finally have it in writing that this is not something I did to him, that there is a name for what he is going through, and that he is entitled to certain accommodations once he's in school.  Also, I'll be able to know specifically what the issues are and research the best way to teach him.  But on the other hand, I feel like omg, my son has a learning disability and there's nothing anyone can do to cure it.

I find myself in the throes of prepping my son for public school.  He may begin as early as 8th grade.  He may decide 9th grade is better.  He may dismiss the whole idea of school altogether.  Regardless, we are still prepping.  Mentally and emotionally, I'm sure he'll be fine.  He has no problem making friends, getting along with people, taking instruction, or being compliant.  He even knows how to stand in line and raise his hand (lol).  But academically, I realize without a doubt, I need to bring things up another few notches.  This is mainly to transition smoothly into a public school workload and to ensure that what he knows and what he will be learning over the next couple of years will stick.


It's very hard to feel like I'm fully letting go of unschooling.  I can combat that thought with - well W is choosing to go to school, so as his parent/facilitator I do what I can to help him reach his goal and pursue that interest - Just like I've been facilitating his interests all along.  As academic as we have been, it's all been through W's request.  We continue with what he likes and discard what's not interesting.  I guess we'll still be doing that in a way, but it will be wrapped around a parent-led workload.  He wants to try school.  This comes with his understanding that I am the one who knows how to not only get him there, but ensure he will be fine once he's in.  He will thank me later.

In 4 days we are driving to the Bronx and W will be evaluated for his learning disability.  Finally knowing specifically what is going on will be such a relief.  Then I can readjust accordingly if I have to.  Tuesday can't come soon enough.

J has spent the last 2 weeks way out in Long Island with one of her best friends.  She's been at the beach and pool every day, tie-dying shirts, going to fairs and parades, and hanging out with a ton of other kids.  She came back last Sunday for her theater jazz/tap workshop but went right back out that night.  It's better than camp, lol.  She'll be at the workshop again this Sunday and then home.  She would probably go right back out to the island if it weren't for her Tue-Thu dance classes starting next week.  I love that she'll be doing Pilates.  It's supposed to be great for dancers.  B went out and bought leg bands and an exercise mat yesterday for her.  She has 2 books to read for school (The Things They Carried by Tim O’Brien and Uncle Tungsten: Memories of a Chemical Boyhood by Oliver Sacks) both of which I picked up yesterday.  She is also taking an SAT prep class over the summer with her friends and I bought the book for that as well.  She is all ready for her junior year at LaGuardia High School of Performing Arts!

Speaking of camp, W decided against day camp this summer.  They lowered the age range and he doesn't like being one of the oldest kids in the group.  So, we'll be out doing something (almost) every day instead.  Summer in NYC is chock-full of events and activities.  I just wish the thermometer would drop below 90 one of these days.  And since W won't be at camp, we have started to ease into the new curriculum.  3 days a week.  We already started the Saxon 76.  The basic addition review is fantastic and the practice problems in the test book are just what he needs.  He learns best by repetition and what I guess would be considered busywork - but I recently realized that repetition is why I never forgot any math facts.  I am also teaching him how to write proper story summaries.  I read The Emperor's New Clothes to him the other day and asked him to narrate back.  He pretty much told me back the whole story, almost verbatim.  (Ok, so I'm positive this kid has no retention and comprehension issues).  So the exercise was to retell the story back in only 4 sentences.  As I held up one finger at a time, he came up with the 4 sentences in perfect order and form.  Now the trick is to get him to do that with pen in hand.  He gets so tripped up on sentences and spelling and punctuation, that he completely loses what was in his head.  I think if I tape-record his summaries and have him write it down while it's being played back, he will learn to write better, faster, and with less frustration.  Well, that's the plan, anyway.  We'll see if it works.